Cross-Site Scripting (XSS) is commonly found a vulnerability in many client-side websites and can be easily found sometimes and sometimes takes lots of effort to find its presence. in this article, I will show you practically what cross-site scripting (XSS) is..?, how to find XSS..?, how to prevent XSS, and much more to know about Cross-site scripting.

we will know more about cross-site scripting (XSS) with its types.


Reflected XSS can arrive when a vulnerable web application receives scripts or data from the user and present it back to web application response in unsafe ways. As the word suggests Reflected, the input data or script can reflect back to the application without a change in it.

for better understanding, I am using DVWA for practical use.
If you don't know how to install DVWA check out 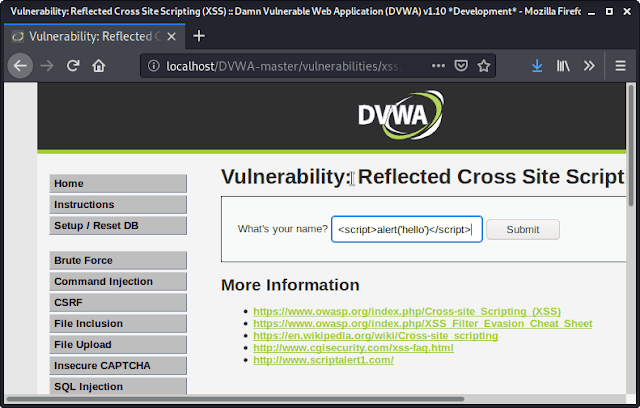 here in DVWA 'what's your name?' is parameter field is present so we can use lots of payloads to test if it's vulnerable or not but first we will be using

payloads are scripts used in XSS which can be modified or used as per application is validating our input. using the above script shows the following pop-up. 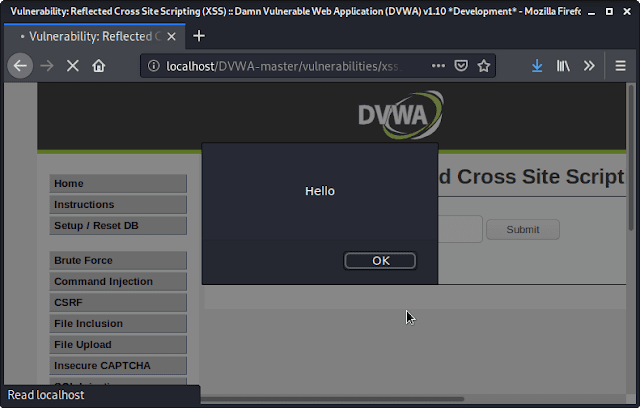 that script simply says web application to alert 'Hello'. and as you can see in the application it popped-up 'Hello' without validating anything.

this script won't work with all web applications because each has different factors that are validating the input and present that validated input via a web application.
you will get it in the next example.

In this example, we will be going to see another example of Reflected XSS.

we have the same screen in DVWA as before but this time it's different let me show you how. 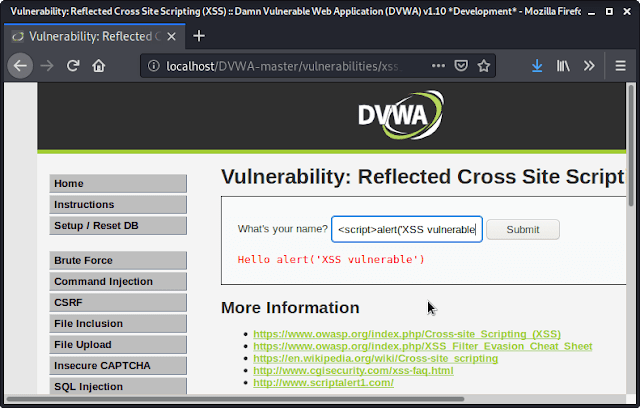 As you can see we injected the same payload in there but instead of pop up we got our validated script back.
As shown in the image our web application validating <script> tags this time.
sometimes it's difficult to find what application is validating because it totally depends on the developer to set validations.
to find it, simply keep trying different payloads or modify payloads with our needs.
Don't worry about XSS payloads I will link it in the end.
Now get back to this Reflected XSS, we need to execute our script without or with getting validated right..?
so we will nest this script tag with another. means we will insert one more script tag in there so if one gets validated by the application then another will be there and execute that script.
modify that script as nested.

this will clear you what nested really is so let's see what happens.. 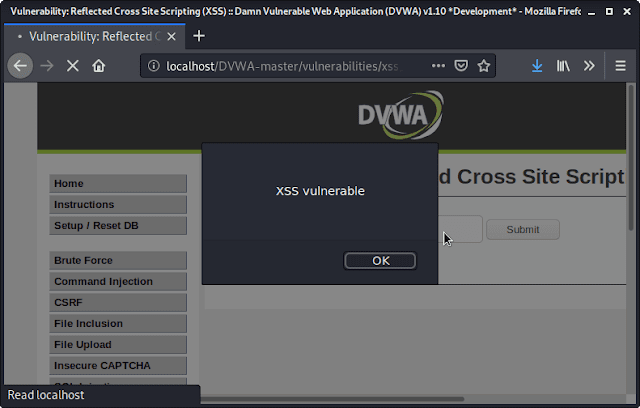 we got a pop-up this time so we can say this web application is vulnerable to XSS  but validating <script> tag. so our approach to further exploitation will be using payloads without <script> tag or nest the tag as we did above.
so this is how you can get an idea about how web application validated or process inputs determine which type of payload is required and the impact of that vulnerability.


Stored XSS basically is, an attacker can inject malicious script or payload in parameter input like a comment field or review application field.
but the catch here is as you can see name Stored, means that the script or payload gets stored in the application execute every time the user visits that page.
The user is fully compromised if an attacker can control scripts that can be executed in the victim's browser. which makes it more dangerous than reflected XSS because the attacker can get full control over the user's data and access.

we will know more about stored XSS using an example.


first, we can see a parameterized input field in there this sign in for guest book is the place where we will be using our payloads. 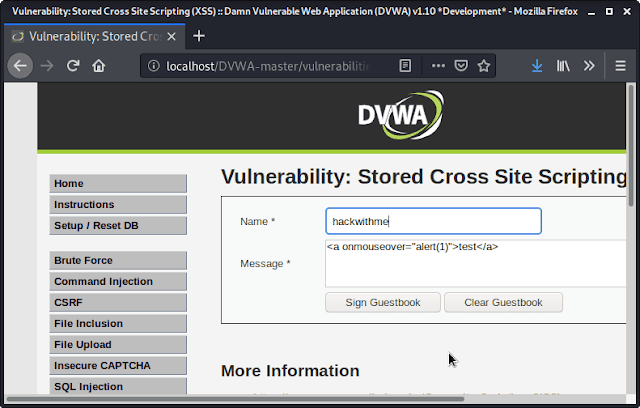 In this example, we will be using payload.

this payload pop up an alert when the mouse cursor is hovered over on the text simple and effective to trigger stored XSS.
just sign in using this payload and you will see an entry named test is made up there. as we hover over the mouse curser there the pop-up will show like in the image. 
In DOM-based cross-site scripting (DOM XSS) attackers can use javascript in web applications using controllable sources this code will further arbitrarily execute in a sink that supports dynamic code execution.
in this attack, the payload can be bound with query strings and fragment portions of the URL so whenever that URL will be opened by the user payload will execute and all user data and session can be accessible to an attacker.

In DOM-based XSS we need to construct an input field which is a URL that can manipulate to sending any javascript to the sink of the web application.

as in the image above we can construct the URL by simply adding javascript after default=' ' and removing the parameter English given by the web application.
we will try the same alert javascript.

in this image I used javascript

and Web application is given pop-up which means it is vulnerable to DOM-based XSS and this javascript executed arbitrarily.

this way attackers can construct a link with payload in it and send it to a victim also do this to websites 404 page and other breadcrumbs so the victim can open it and javascript will arbitrarily execute in that page and victims session and data is accessible by an attacker.


There are 3 types of cross-site scripting (XSS) and these are very common web security vulnerabilities found.

How to Prevent cross-site scripting

1. By filtering user inputs -  as based on valid input user input should be validated correctly and strictly using input filters. expected input only allows to processed further and unnecessary input such as scripts and payload can be validated to some extend.
this you can see in the example above, where we used nested script.

2. Output data needs to be encoded - output data that is generated by user-controllable data can be encoded first before showing it on web pages. data encoding can make it very difficult for an attacker to find the output because it's encoded. also using a different encoding such as javascript, HTML, CSS, URL can make it tough to get output from web application.