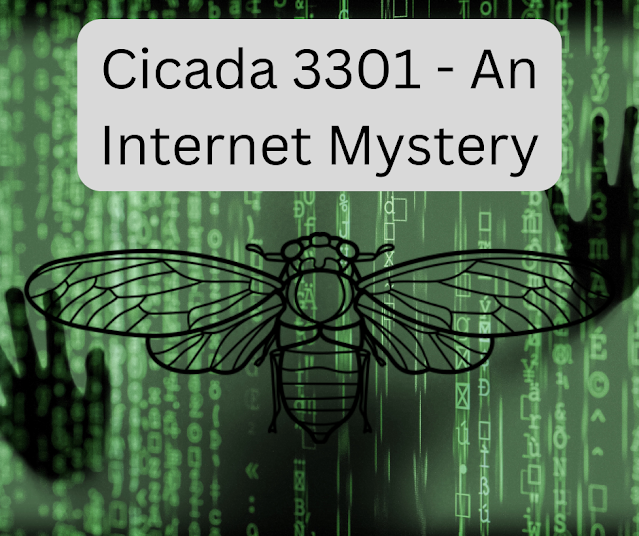 By the following day, the initial image had been reposted all over the Internet, and a growing community of armchair detectives saw to unravel this elaborate puzzle. However, no one was quite sure what to make of it; no one was quite sure what the puzzle was for, who was behind it, or what happens when you reach the end. Some people naturally dismissed it as an elaborate joke, while others perceived its complexity as evidence against it being the work of a simple troll.

Soon after, suspicions started to spread that this may be the work of a secret organization or intelligence agency with the intention of recruiting persons who are adept in cryptography, steganography, and other similar subjects. Of course, this turned out to be nothing more than a rumor. the two missing numbers mentioned in the recording turned out to be the dimensions of the original image of by multiplying the width and height with 3301 and using the product as a web address, users were taken to a website the website consisted of a countdown as well as an image of a cicada when the countdown reached zero the page was updated with a list of coordinates the coordinates pointed to locations around the globe 14 locations in five different countries it was now clear that the recording had been tampered with. the image contained a riddle, the riddle led to a book, and the book led to a website; however, the puzzle took an unexpected turn here, and only a select group of first arrivals to this website were accepted into the final stage of the puzzle. The website eventually closed down with a message that said we want the best, not the followers. It is safe to assume that not all of the contestants heeded the warning that they should not work together with the other contestants or share the details of this private stage of the puzzle with anyone else. However, those contestants who did heed the warning likely progressed through the final stages of the competition before reaching the very end of the possible outcomes.

Another hint led to a mysterious Twitter account, which in turn led to a picture; this image turned out to be essential to the next step of the problem, but the presence of this runic alphabet would remain a mystery for a considerable amount of time, similar to the situation with the first challenge. the second one exploded into the real world when a set of coordinates encouraged people to go out into the streets once again in quest of mysterious posters. This time, it was eight locations in four different countries, but eventually the trail went cold. Once again, a select group of first arrivals have been accepted into a final private stage of the puzzle. In contrast to the first puzzle, the second puzzle did not conclude with an official message from cicada. Instead, the train simply stopped moving, and cicada vanished once more, bringing us no closer to an explanation. However, this was not the end of the mystery.

At the beginning of 2014, it was time for round three. Once again, the picture contained a message, the message led to a book, and the book provided the connection. Suffice it to say, it was more of the same, with the exception that this time the riddle seemed to center around an unusual book. Cicada was most likely responsible for writing the book, which was published under the title liebherr premium first book in latin. the runic alphabet that was discovered in 2013 finally made sense as the book was primarily written in runes; however, the meaning of the translated pages was cryptic at best. the book consisted of areas philosophical and ideological ideas and appeared to be their manifesto; many people have since compared the strange writings to that of a cult; however, the book also comprised a multitude of clues and codes; for example, this page advised participants to seek out the website on the Deep Web. the book also contained However, a substantial amount of the book has not yet been translated, and there was a link on another page that sent the reader to a website with yet another recording labeled "interconnectedness." the Roenick text on some of the pages appears to be obscured by layers of encryption that have not yet been decrypted. After 74 pages featuring runes, only 19 have been successfully translated. When 2015 passed without the launch of a new puzzle, many people began to suspect that the Liebherr Premium Plus would return. This was more or less confirmed at the beginning of 2016 when cicada encouraged a reexamination of the book. More than four years have now passed with minimal progress and no solution The questions that were raised by the first photograph have been disregarded. What exactly is the point of these conundrums, and who exactly is behind them? what takes occur after you have reached the air

When the first image of Cicada 3301 appeared on 4chan in 2012, many people incorrectly assumed that it was an alternate reality game developed by a corporation to promote a new service or product. For instance, Microsoft developed an elaborate Arg in 2001 to promote the film artificial intelligence, and a similar viral marketing campaign was used to promote the release of Halo 2. However, the release of subsequent puzzles and the complete lack of commercialization has more or less eliminated that p. but the release of subsequent puzzles and the complete lack of If we choose to believe some of the leaked information from the private end stage of each puzzle, then we do gain some insight into who this group might be. For instance, at the end of the first puzzle, the finalists were supposed to receive this email in which cicada described themselves as an international group that believes that privacy is an inalienable right. The goal of each puzzle is to recruit like-minded individuals in an effort to develop privacy conscious solutions. Cicada has been leaking some of the information from the private end stage After that, there are three questions at the end of the email. If a version of the email with a valid signature did exist online, the leaker erased the PGP signature that would have validated the authenticity of the email. This was done in a convenient manner by the leaker. I was unable to locate it, but regardless of whether or not it is valid, I find this question to be rather peculiar in the way that it is worded. Do you believe that information should be freely available? If the answer to that question is yes, then the very first sentence, "do not share this information," seems a bit hypocritical. While the concept of a secret society recruiting individuals by means of elaborate cryptographic puzzles may seem a bit absurd or even conspiratorial, it is not entirely unfounded.

Can You Find It? is a recruitment program that was launched in 2013 by the British intelligence agency GCHQ. Participants were required to decrypt a number of cryptograms that were hidden across the internet. Those who were successful in solving the entire puzzle were offered a prize or a position at the agency.

Similar recruitment strategies have been used by corporations and governments alike at least since the Second World War. In 2004, Google did something similar with cryptic billboards, and in 2014, the United States Navy launched a project that was nearly identical to it. Okay, but what about the recruits? Why haven't we heard from these chosen few? Well, we have, but it's just that distinguishing a genuine finalist from an impostor is virtually impossible.

In contrast to the 20 or so people that correctly answered the first problem's question about who or what a cicada is, the Knox public and around five others have solved the second riddle. If you want the much more comprehensive walkthrough of these puzzles as opposed to my brief overview, click here. Knox Populi believes there could be a remnant of the cyberpunk movement that existed in the late 1980s and 1990s. This would be essentially a small group of activists advocating widespread use of strong cryptography and privacy enhancing technologies. However, he admits that there is no way to know for certain if this is the case. While these accounts cannot be verified, the videos that Knox Popular has uploaded to his channel make for a very compelling argument about what Cicada is.

Cicada is a group of anonymous developers who are working to develop privacy conscious applications by recruiting talented individuals through cryptographic puzzles. Knox Popular has uploaded a number of videos that can be found on his channel, all of which come highly recommended by me. You have to keep in mind that no part of these puzzles would have required more than one person. the posters are often pointed is evidence that this must be the work of some international organization, but I beg to differ.

I mean right now I could use any one of a number of services to hire random people all over the world to infiltrate organizations and steal information. Cicada issued their most recent public statement in April of 2017, in which they merely issued a warning against the information in question; however, the current status of the third puzzle as well as the possibility of a fourth puzzle remain shrouded in mystery.